The world isn’t getting any smaller but the number of sports venues available for tournaments and events continues to grow. Here’s our look at the best of the next-generation of sports facilities.

Elizabethtown Tourism and Convention Bureau Executive Director Janna Clark has a new weapon in her arsenal with this 103,000-sq.-ft. indoor facility that opened in January. Because of the material the fields are made of, myriad sports ranging from futsal and volleyball to MMA and basketball are available.

The biggest addition to the Vegas Strip arrives in March. One month later, Caesars Forum will be the site of the NFL Draft. It’s the largest single-level conference center in the world and can host meetings, receptions and athletic competitions.

This $42 million venue, situated next to its sister site,  Sports Force Parks at Cedar Point Sports Center, will open the door for indoor sports in the Lake Erie region. It has 145,000 square feet of playing area, including a championship arena and ninja warrior course.

The long-awaited project became a reality in November 2019. Its 160,000 square feet includes four basketball courts/eight volleyball courts, an ice rink and a seasonal arena that can host hockey or non-ice sports.

A $288 million renovation of the convention center, set for completion this fall, is one of the linchpins in a complete redevelopment in OKC. It has 200,000 square feet of exhibit space, a 30,000-sq.-ft. ballroom and 45,000 square feet of additional space. The center is also near Chesapeake Energy Arena, making the two venues a perfect pairing for a large event.

Ten years in the making, the site opened for business in December 2019. The $6 million complex has multipurpose fields, a putting green, basketball and handball courts, a baseball field with press box and bleachers, a pavilion and picnic area and playground equipment.

The 5-acre facility is home to a turf soccer and football stadium that seats 2,500 people. It will also have two adjacent turf training fields, 10 sand volleyball courts, four locker rooms and full concessions services. The sports facility is paired with Balmoral Resort, which rents out two- to six-bedroom houses on-site to athletes, coaches and families. 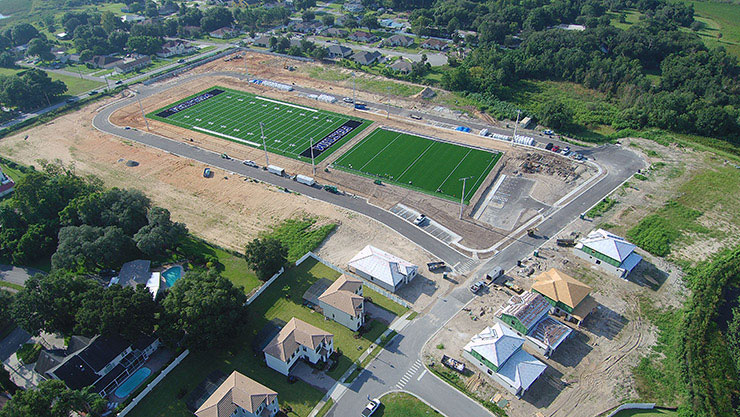 Erie had two ice pads in winter 2018; now it’s up to five with Flo Fabrizio. The ice center is located at the city’s zoo, and a tournament here would be popular for siblings who otherwise would only be watching the game action.

The completion of Exhibit Hall BC adds more than 1 million square feet of contiguous exhibit space to one of the country’s biggest facilities. Volleyball tournaments and mega sporting events like the Final Four and Super Bowl will benefit from this added space close to Mercedes-Benz Stadium. 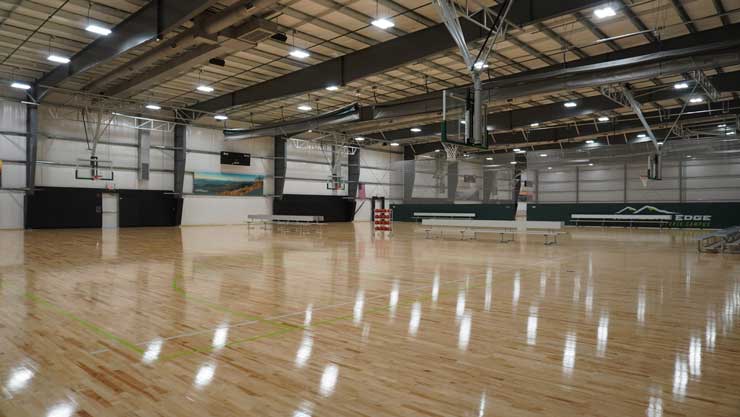 Opening in November, the 1.5 million-sq.-ft. resort includes a 200,000-sq.-ft. convention center. The resort serves as a perfect complement to Round Rock Sports Center, which has cemented the destination’s appeal for youth and amateur sports events.

Renovations to the convention center, coupled with January’s opening of Hyatt Regency Portland at the Oregon Convention Center, promise to further expand Portland’s profile among groups. The hotel adds 20 new meetings/receptions venues, totaling a combined 38,000 square feet. The $40 million renovation of Oregon Convention Center is its first major upgrade in its 30-year life span. It is the largest convention center in the Pacific Northwest with 255,000 square feet of contiguous exhibit space, two grand ballrooms and 52 individual meeting rooms.

This $80 million project from Sports Force Parks will feature 19 fields and open in three phases, beginning with its first event over July 4. Phase 1 is mostly open now, Phase 2 is slated to open at the end of this year featuring the stadium and Phase 3 is currently slated to open in 2021 and will feature additional football/lacrosse/soccer fields and the baseball fields. The complex is announced as the new home of FBU’s National Championships, FBU’s Top Gun and four new events during the next year.

The newest part of the SFA family celebrated its grand opening last fall. It is already adding to the destination’s appeal, expanding its repertoire from diamond sports to provide a first-class venue for soccer, lacrosse and myriad sports. There are 45 events booked for this year to bring in 45,000 athletes, a testament to the work put in by GM J.D. Wood before his recent move to the Dallas Sports Commission.

The USA Softball Hall of Fame Complex - OGE Energy Field will get a modernized look with upgraded features to enhance both the fan and media experience. The venue is home to the NCAA Women's College World Series through 2035. Renovations will be completed in time for the 2020 series.

A 200-meter hydraulically banked track is among the highlights of this site when it opens in November. There will be 117,000 square feet of playing space for 12 basketball courts and 24 volleyball courts. Connect’s Indoor Sports Summit will offer an early look here.

A new stadium built where Lawrence-Dumont Stadium once stood, will host the Wichita Wind Surge, a Triple-A affiliate of the Miami Marlins. Opening day is April 14. Beyond games, the stadium has five spaces available for sports-themed meetings. 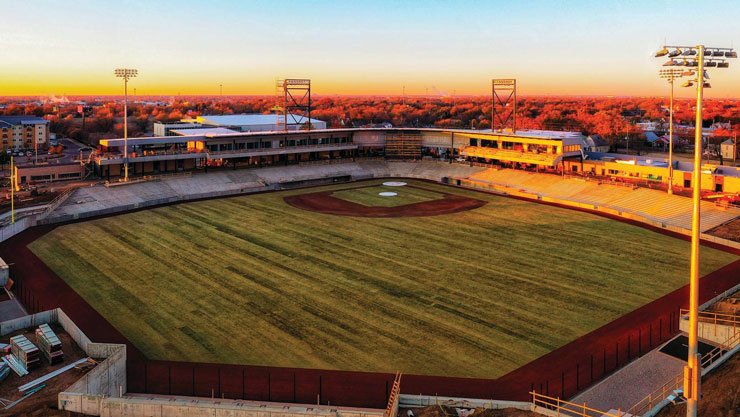 At 378 acres, this facility will be the largest equestrian facility in the United States when it opens this year. A 254-suite, five-star hotel will be on-site. It will host its first event in October 2020, the Golden Retriever Club of America National Specialty Show. Then in December, it will host the Southern Regional Paso Fino Horse Association Ocala Cup.