After FIFA World Cup officials made their site visit in October 2021, the Visit Seattle team was confident it put its best foot forward. But that doesn’t mean the countdown to host cities being announced wasn’t nerve-wracking.

“The last 24 hours, you start to question everything,” says Kelly Saling, senior vice president and chief sales officer at Visit Seattle. “We got to be surprised at the same time as the rest of the universe.”

While FIFA’s tight-lipped process did yield a few eye-opening decisions for the 2026 tournament, celebrations from Seattle’s Space Needle to Miami’s Fritz & Franz Bierhaus roared across the country on June 16.

Eleven U.S. destinations were among the 16 North American selections. Five—New York/New Jersey, Boston, San Francisco, Los Angeles and Dallas—hosted the 1994 World Cup, a pivotal moment for soccer in this country. Seattle, Miami and Philadelphia join Atlanta, Houston and Kansas City as newcomers to the field.

What’s yet to be decided—at least publicly—is which cities will host games beyond the opening round. “I WANT THE FINALS!!!!!!!!!!!!!!,” Dallas Sports Commission executive director Monica Paul wrote in an email to Connect Sports. New York, Los Angeles and perhaps even Atlanta might have something to say about where they’d like to see the championship played.

Destinations without a massive stadium such as AT&T Stadium (aka “Jerry’s World”) in Dallas are less ambitious. Saling, who has dreamed of attending the World Cup since she was a teen during the 1994 edition, says Seattle will gladly accept quarterfinal matches. The best guess is June 2023 for the next round of site selections.

The 2026 World Cup is sure to be the biggest ever, if for no other reason than it will be the first to include 48 teams instead of 32. The 1994 Cup set records in total and average game attendance, both of which FIFA is seemingly counting on being broken.

Saling says Seattle was asked to commit 10,500 room nights on peak within two hours of Lumen Field—just an example of the required partnerships CVBs and sports commissions will need to host what will likely be their largest event to date.

Here, we talk to key players in the winning 2026 bids from the Bay Area, Miami, Philadelphia and Seattle about what set them apart.

Not to be outdone, Philadelphia played up its recent history hosting international dignitaries, national conventions and large-scale sporting events. “In the last two decades, Philadelphia has hosted two national political conventions, visits from Pope Francis and the Dalai Lama, as well as the NFL Draft,” lists Meg Kane, bid coordination and external affairs for Philadelphia Soccer 2026, which organized the World Cup efforts.

Then again, Saling credits Seattle’s ability to fly under the radar for its strong pitch. The home of Microsoft is by no means a small city, but is not a behemoth market like New York or Los Angeles. In this situation, Seattle was a bit of an unknown quantity. “We got to do what Seattle does best, which is to surprise and delight,” says Saling. 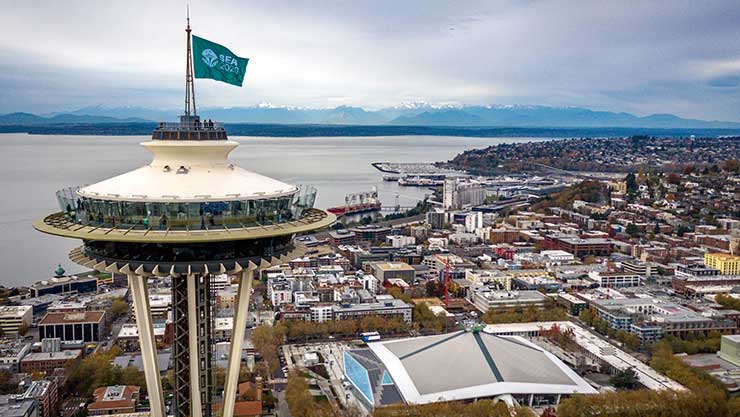 When FIFA adopted East, Central and West regions for the 2026 Cup, it created a dilemma for a stacked group near the Atlantic Ocean. The joint Baltimore-Washington bid and Orlando, always an event favorite, were passed over in favor of Toronto, Boston, Philadelphia, New York/New Jersey and Miami. Atlanta, host of the 1996 Summer Games, was slipped into a central slot to avoid being shut out.

The other regions seemingly had more flexibility. Texas and California both earned two spots in the respective groups. Atlanta, Houston and Dallas are joined by Kansas City, Mexico City and Monterrey, Mexico, in the Central zone. Newcomers Seattle, Vancouver  and Guadalajara, Mexico, are paired with L.A. and San Francisco out West.

It’s hard to find another country with as many ready-made stadiums for a world-class competition as the U.S. The vast improvement of inventory from the 1994 Cup is on display with this new batch of hosts.

Miami, for instance, has always been a favorite among international tourists but only had the Marlins’ baseball stadium available 30 years ago. Its size and limited availability were dealbreakers back then. Neither were an issue this time around with a premier venue to tout. “Hard Rock Stadium was built with the FIFA World Cup in mind,” says Aedo, noting that Miami Dolphins owner Stephen Ross has invested nearly $1 billion to make it a world-class home for myriad events.

Likewise, Veterans Stadium would have been the only option in Philadelphia in 1994. While a storied football arena, it pales in comparison to Lincoln Financial Field, which Kane says is renowned for its infrastructure and upkeep. Lincoln Financial Field is also no stranger to big-time soccer, having hosted the CONCACAF Gold Cup, FIFA Women’s World Cup and dozens of U.S. Men’s National Team friendlies.

Seattle’s fan base is so renowned the Seahawks trademarked “The 12th Man” for its home crowd. Saling says that energy carries over to the Seattle Sounders’ MLS games and international competitions. FIFA representatives were among the boisterous crowd for a CONCACAF Champions League match in May. “They got to see how the city responded to an opportunity like that,” says Saling. “That really cemented it.”

There’s no denying Philadelphia’s fan base, which is famous for enthusiasm to the point of infamy (booing Santa Claus). In this case, all that energy was put to good use during the one and only chance to make a firsthand impression during FIFA’s site selection team.

“Hundreds of fans lined Market Street as the delegation passed by, cheering them as every digital sign along the route lit up with welcome messages,” says Kane. “Upon their arrival at Lincoln Financial Field, another 400 fans cheered the delegation into the stadium with signs, a drum line, mascots and chants of ‘Philly wants the World Cup!’ It was a real moment and one that was unique to the Philadelphia site visit.”

Bay Area 2026 Host Committee executive director Patricia Ernstrom views the efforts as a reward to a fan base that’s long loved the sport. “Soccer is part of the Bay Area’s DNA—with the region being soccer crazy for decades—going back to the ’94 World Cup and back to the 1970s,” she says. “When you add that to the region’s incredible diversity and history of hosting incredibly successful major sporting events, we couldn’t pass up the opportunity to work to deliver another incredible FIFA World Cup experience to fans throughout Northern California and beyond.”

The scope of the World Cup is evident with the unusual bid process, which began five years ago. Naturally, CVBs and sports commissions provided their expertise, but it took more than a village to sell entire destinations. Complicating matters was COVID, which limited on-site inspections and festivities. Local politicians amplified the messaging and cheered on during live watch parties.

To drum up support before the site selection announcement, Philadelphia’s team launched a digital mosaic with Mural Arts Philadelphia that was hugely successful as well as a five-month on-site takeover of the Independence Visitors Center with its “pitch,” says Kane.

“We couldn’t have done it without the collective effort from each of our partners,” says Ernstrom, espousing a sentiment from all communities involved in the World Cup process.