John David, chief operating officer of USA BMX, remembers dreaming 20 years ago of an all-in-one facility for the NGB’s staff to work in, racers to train and compete in a world-class arena, and to be home to the sport’s hall of fame. It took some time, but BMX’s thrilling ride to such a headquarters became complete last week in Tulsa, Oklahoma.

The headquarters are not what David expected—they’re more. “I truly believe that the facility is actually better than I could have dreamed,” he said.

As impressive as the coordination required to construct the headquarters was, it may pale in comparison to what’s ahead. The operations will be a showcase for teamwork that will allow BMX as a sport to continue to grow internationally, USA BMX to reach even more riders nationally and for Tulsa to directly benefit from the partnership that comes with hosting the facility.

Given its success, USA BMX is hardly in need of a fresh start. Rather, think of the new headquarters as moving the organization into a higher gear. There could be bumps along the way—it would be fitting for a sport like BMX—but the road ahead seems destined to demonstrate the full dynamics of sports tourism.

Think we’re overstating the case? Consider these reasons David and USA BMX are so bullish on the message the new headquarters sends, to say nothing of the day-to-day benefits. 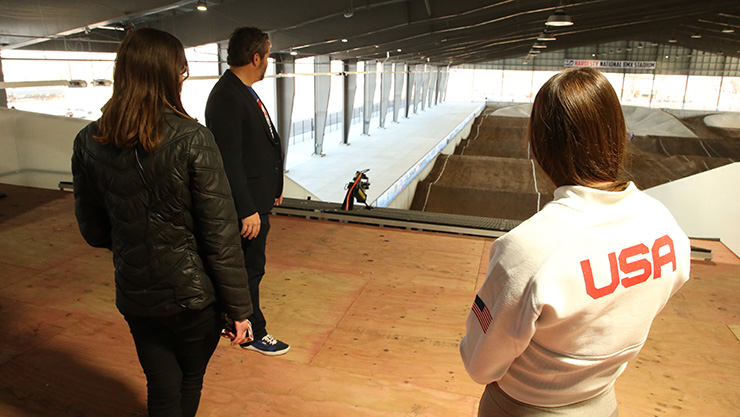 USA BMX didn’t build a new headquarters for the fun of it. A larger, more versatile site than the original home in Gilbert, Arizona, was required to match the sport’s rising popularity. “When I started here, we owned and operated 16 events,” says David. “Now, we own and operate over 60 events. Our membership has exploded.” The new site allows for a bigger staff and the technology and resources to capitalize on the sport’s continued momentum.

USA BMX and Tulsa are hardly strangers. The city hosts the NGB’s Grand Nationals each Thanksgiving and would continue to do so regardless of the headquarters move. “We’ve watched Tulsa grow with the Grand Nationals. … We’ve seen it reinvent itself,” says David. Nevertheless, the headquarters takes on a significance similar to marriage after a long courtship. The commitment is evident when David remarks he hopes Tulsa will be to BMX as Bentonville, Arkansas, is to Walmart.

Sports tourism is built upon an event organization working with a host to put on a competition for a short stretch of time. This move multiplies the power of such partnerships. Indeed, David says Tulsa’s embrace of sports as an economic driver, and specific support to USA BMX, was the deciding factor in moving the headquarters there.  “The community has bought into sports tourism,” says David. “They love what the sports commission is doing. It’s palpable.”

Few planners in the industry are as well respected as David. Likewise, Tulsa’s CVB and sports commission are replete with award-winning salespeople. While Ashleigh Bachert, vice president of sales, and Joel Koester, director of sports sales, relocated to Tulsa midway into the BMX move, their presence now is only going to boost the headquarters’ role in economic development.

One of USA BMX’s goals is to produce medal winners every four years. It can recreate planned courses for future competitions, such as the 2024 Summer Games in Paris, on-site for better training. By virtue of its location in the middle of America, the USA BMX headquarters should be a beacon for top riders. But don’t forget the locals, who will have access to it year-round. “One of our long-term goals is for someone from Tulsa to be an Olympian,” David acknowledges.

U.S. star riders will almost certainly check out the headquarters, which could be a natural fit for Olympic team trials should USA Cycling go that route. The reach will extend beyond borders, though. David fully expects foreign national teams to travel to Tulsa for training, making the Oklahoma host a truly international destination. Additionally, as home to American Airlines’ manufacturing center, Tulsa is an engineering hub. The expectation is that skill set will translate to better bicycles.

USA BMX is serious about developing children in Tulsa, regardless of if they are elite athletes or just along for the ride. “First and foremost, we want families to bring their children out to come and learn how to ride their bike at this facility,” says David. The organization is going well beyond that, though. Programming, including a spring break camp, incorporates lessons dealing with the science, technology and mathematics—better known as a STEM curriculum—that go into cycling to make it a full-on learning experience.