Two prominent Quidditch organizations are in the process of disapparating from the sport’s magical origins.

US Quidditch and Major League Quidditch made a joint announcement in December to pursue a new name for the sport based upon the beloved “Harry Potter” franchise. The leagues are conducting surveys over the next few months before unveiling the new name.

The reasoning for the rebrand is twofold and a few years in the making, according to a spokesman for the league.

Most notably, it is a measure to distance the real-life version of the sport from J.K. Rowling’s public stance against transgender people. The author has been under fire for her views and was, in fact, absent from the recent program celebrating the 20th anniversary of the first “Harry Potter” film.

Secondly, trademark issues (“Quidditch” is owned by Warner Bros.) were beginning to limit marketing and other outreach efforts.
“I believe Quidditch is at a turning point,” says US Quidditch Executive Director Mary Kimball. “We can continue the status quo and stay relatively small, or we can make big moves and really propel this sport forward into its next phase. Renaming the sport opens up so many more revenue opportunities for both organizations, which is crucial to expansion.” 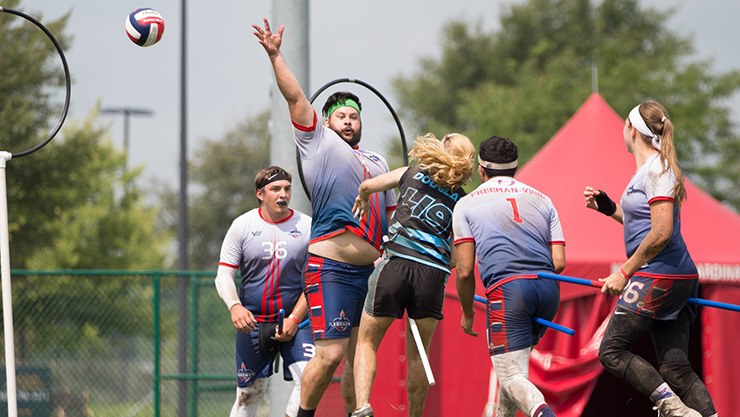 Quidditch Through the Ages

Quidditch was first introduced to the world when “Harry Potter and the Philosopher’s Stone” was published in September 1997. The book arrived in the United States a year later with the “Sorcerer’s Stone” title. In the subsequent books and films, the sport is a mix of what would happen if one were to combine rugby, dodgeball and soccer into a pewter cauldron. Seven players per team move on flying broomsticks, accumulating points by tossing the Quaffle through three hoops until the seeker captures the Golden Snitch, worth 150 points.

A pair of Middlebury College students, Xander Manshel and Alex Benepe, adapted the game to one that muggles can play—feet firmly on the ground—in 2005. What began as a sport played by dozens of students has transfigured into an international phenomenon played by thousands.

US Quidditch, the sport’s national governing body, organizes the annual Quidditch Cup and several regional events that destinations compete to host. Past sites include New York City; three destinations in South Carolina; Kissimmee, Fla.; and Round Rock, Texas, which hosted the past two Cups, in 2018 and 2019. Valley Forge, Penn., has been awarded the 2023 Cup, the first to be held since the pandemic.

Major League Quidditch, meanwhile, was founded in 2015. It consists of 15 franchises and one trial expansion team spread across the U.S. and Canada that play in the summer.

Players, particularly early in the sport’s growth, were drawn in by their love for the “Potter” franchise. Now, though, the leagues have participants who have never read the books or seen the movies. Rather, they became interested in the sport itself. In that regard, the Warner Bros. trademark acts a bit like the Immobulus (freezing) curse when it comes to growth.

A new name will allow the organizations to actively seek out new sponsors, licensing agreements and broadcasting deals, a spokesman says.

“The sport needs its own space without limits on its growth potential, and changing the name is crucial to achieving that,” says Benepe, the sport’s co-founder who is in favor of the change. 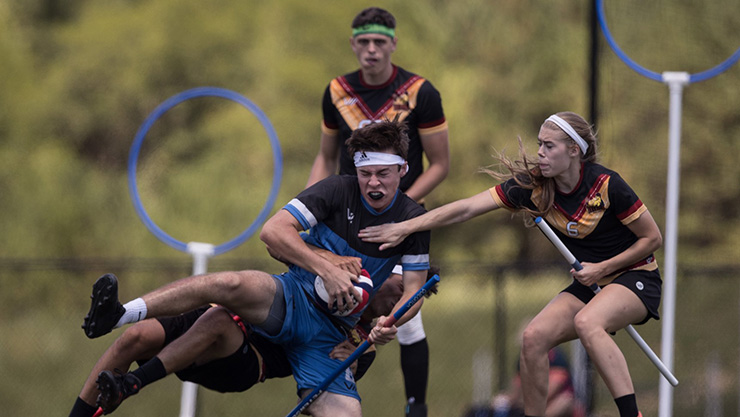 Defense Against the Dark Hearts

Dating back prior to Jackie Robinson’s debut with the Dodgers, sports have been a leading force toward greater diversity and inclusion. LGBTQ+ rights have risen to the forefront over the past two decades. US Quidditch and Major League Quidditch both cite inclusivity as one of their guiding principles, putting them at odds with Rowling’s comments. USQ was scheduled to host a tournament as part of this month’s Sin City Classic, the largest annual LGBTQ+ event in the country.

The organizations conducted research, including polling players and volunteers, about changing the name. Support from within the sport encouraged USQ and MLQ to make this joint effort, which the groups say is just another step forward for the evolving game.

“Since the sport’s founding in 2005, Quidditch has undergone so many transformations—the rules have changed; team names and jerseys are incredibly creative, fun and professional; and our events look more like a soccer tournament than anything else,” notes Kimball. “I'm proud to stand with our community as we go through another big change, one that allows us to truly live our values as an inclusive, safe sport for athletes of all races and genders."

December’s announcement drew cheers from members of the LGBTQ+ sports community. Kimberly Hadley, co-officer of sport for the Federation of Gay Games and a longtime champion for LGBTQ+ athletics, went to Facebook to applaud the Quidditch news.

“I hope the name of the sport and any references to other parts of the game is changed worldwide to eliminate any reference to Rowling or her book series,” says Hadley. “The new name should reflect the truly inclusive environment that the sport already serves!”

“We just need to make sure that once a name of the sport is selected that it is recognized worldwide for consistency’s sake,” she adds. 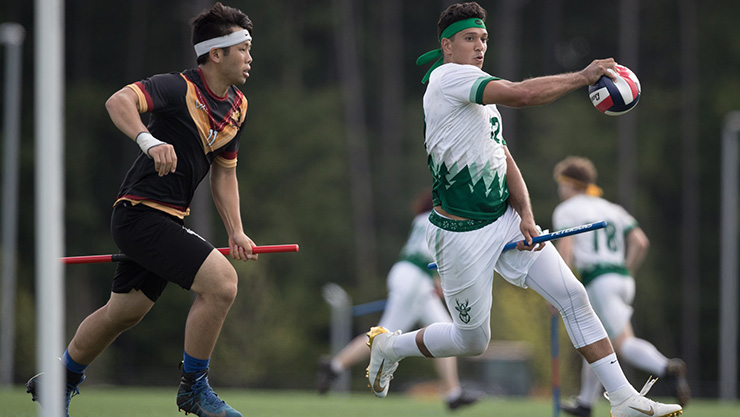 Rebrands are not unprecedented and are increasingly common as franchises respond to mascot criticisms. The Washington Football Team in 2019 dropped its affiliation with Native American terminology and symbolism and will unveil a new name—perhaps the Commanders—on Feb. 2, 2022. Similarly, Cleveland’s baseball team became the Guardians after Major League Baseball’s 2021 season.

The closest to Quidditch’s case is Ultimate, which dropped the “Frisbee” from its name because of a trademark issue with Wham-O toy company. It continues to be wildly popular and even has Olympic aspirations.

But can Quidditch completely distance itself from Rowling, who first originated the concept? Early signs suggest some nod to the wizarding world.

The letter Q will remain prominent and Major League Quidditch is describing its changes as a soft rebrand while US Quidditch is making larger changes, in part because its current logo features a cape, which could be in violation of the trademark. MLQ’s logo uses three hoops, which are integral to the real-life version and the one where Harry Potter and Viktor Krum are stars.

Marketing experts agree it will be a challenge to gain total adoption of the new name after being a critical part of one of the most successful popular culture franchises in recent memory.

We received some recommendations from marketing professions on how to make a smooth transition as Quidditch becomes the sport that shall not be named.

Peter Honig, president of consulting at CSM Sport & Entertainment, can’t recall a case of a sport divesting itself from its creator, who in this case conjured the game out of thin air. Rowling’s books and the “Harry Potter” franchise remain very popular regardless of the controversy surrounding the author. Honig says USQ and MLQ would be wise to remember Rowling’s impact going forward. “I think without her involvement, there’s always going to be a missing ingredient,” Honig says. “Mending bridges and having [Rowling] involved in the solutions could be a worthwhile endeavor.”

2. Be Prepared for Debate

Should Rowling be interviewed about rebranding Quidditch, chances are she will voice her presumed displeasure. Honig doubts she will be alone. In planning public relations, the first step should be to anticipate some level of backlash and move on from there. “You just need to expect there’s going to be criticism, no matter what name they end up landing on,” he says. “I think most people would be open to that type of shift if they were clear about why the changes are being made and what was at stake. I’m not sure that that’s been clearly demonstrated.”

One way to reach out to Rowling and naysayers is to take a page from Rowling’s book(s). Juli Ann Patty, chief brand officer at NEXTOLOGIES and Ethnic Channels Group, two Toronto- based broadcasting companies, suggests the leagues find inspiration from the author’s abilities. “[Rowling] is brilliant at creating backstories, and I would recommend the leagues do a similar thing—write a backstory for the sport, a Quidditch origin story in which the sport had a different name,” says Patty.

The Quidditch question comes at a time when diversity and inclusion are becoming far more than simple niceties. There is an opportunity for Quidditch to attract a base of young participants drawn to the act of taking a stand against hateful speech. USQ and MLQ would be wise to use the trend to their advantage. It will pay off in more ways than one, Honig suggests. “Purpose and profit don’t need to be mutually exclusive,” he says. “Quite honestly, they need to coexist. Organizations that lead with values and purpose tend to drive more profit.”

Adjusting to changes always takes time. The challenge is greater in the case of Quidditch as millions of young readers will annually read about the sport with its original name in the books. “When you’ve got heritage history, there is a connection and there’s identity,” says Honig. “To expect that to flip just because a leadership team changes a name is an unfair expectation. This is generational.”

As time and debate linger in the transition, another consideration to remember is that organizers can’t simply welcome those who disagree with Rowling’s commentary and agree the sport needed a rebrand. There will be a split, which is a challenge but also an opportunity to demonstrate true inclusion. “The idea of being inclusive involves disagreeing,” Honig says.

Whatever USQ and MLQ do, it needs to capture the imagination, notes Patty. “[‘Harry Potter’] fans are lovers of story, and if the leagues can create something compelling—complete with new ‘houses’ as teams—they could give the whole enterprise a new, complex and legally separate life.”

Without the power of divination, no one knows what the future holds for Quidditch. Given the unusual set of circumstances, Honig thinks it will be fascinating to review the success in years to come.

“What’s very interesting about this is the different set of challenges and conditions compared to what we typically see when a team name triggers an emotional response from a community and the name symbolizes a racist stereotype,” he says. “I don’t think [Quidditch] evokes the same type of negative reaction from anybody familiar with the sport. So, this is a very unique challenge.”

“I think how you separate [Rowling] from the sport will be the case study for future rebranding efforts,” he says.