For perspective on the inaugural Maryland Cycling Classic, many of the riders rolling down Pratt and Market streets in Baltimore over Labor Day were racing along the Champs-Élysées during the Tour de France earlier this summer. The pedigree of participants immediately established the Maryland event as the country’s top-rated cycling event. The race organizers, Medalist Sports, and event owner, the Sports and Entertainment Corporation of Maryland, both proclaim the 2022 iteration is just the beginning.

Terry Hasseltine, president of the Sport and Entertainment Corporation of Maryland, first conceived of a high-class cycling race in 2008. The recession hit the brakes on those dreams. A decade later, plans were finally set in motion alongside Medalist Sports, arguably the country’s top cycling event producer. But, the pandemic sent those plans into a lockdown that also shut down efforts for a retry in 2021.

With nothing in the way this year, a nearly flawless four-day event from September 2-4 established what appears to be a new tradition for the state of Maryland.

“This project has been one of perseverance and pride,” says Chris Aronhalt, president and CEO of Medalist Sports Inc. “The combination of the two made the experience so special.”

Upon reflection, such challenges are only fitting for a sport that specializes in testing endurance and strategic planning. The riders rose to the occasion during the Maryland Cycling Classic’s main event (the actual race). Behind the scenes, the same is true for the team of Medalist, Visit Baltimore, KOM Sports Marketing, and the Sport and Entertainment Corporation of Maryland.

“The vision is that this is going to become a tentpole event for the state of Maryland—kind of like our Preakness of the fall,” Hasseltine says. 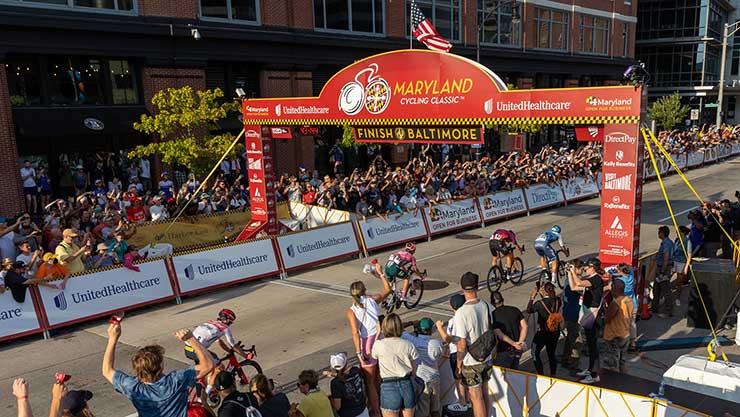 It’s unfair to call any world championship a test run, yet the 2015 UCI Road World Championships in Richmond were proof that the mid-Atlantic is a hotbed for cycling. Baltimore, in particular, made for an ideal location as it is driving distance (four hours or less) from Richmond; Washington, D.C.; Philadelphia; and New York.

Organizers wisely planned with the knowledge that the Maryland Cycling Classic doesn’t operate in a vacuum. Officials studied the calendar of cycling’s world governing body, UCI, to avoid conflicts with its tour. “You have to work with the international federations and work the calendar, and there is politics in there,” says Hasseltine. Rather than conflict with existing events, the Classic proved a gateway for races signed up for upcoming competitions in Canada, Aronhalt notes. 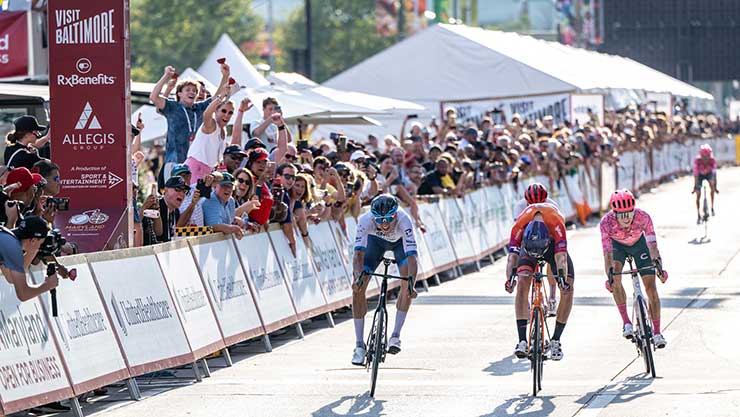 Labor Day was always a target date for this event. Interestingly, the timing proved correct for different reasons than originally thought. Typically, the long weekend is a relatively light one in Baltimore as many locals and travelers head to the beach one last time. The race would then assist in filling hotel rooms and be smooth sailing on the streets.

However, crowds eager to make up for lost experiences over the past two years descended on Charm City this year. Race officials took advantage of the bigger audience to enhance the experience. For instance, Sunday’s schedule was altered to conclude in the late afternoon—just as the Baltimore Orioles game was letting out so fans could walk down to the action and add some bonus social media coverage. Hasseline adds five weddings were occurring during the race, just to add to the celebratory feel.

As a leading sports tourism official, Hasseltine cheers the chance to deliver during a crowded sports weekend that featured the college football season’s kickoff, the conclusion of the NFL preseason, the Major League Baseball pennant race, U.S. Open tennis and WNBA playoffs.

“You have all this stuff coming together and you're putting Baltimore right in that conversation,” says Hasseltine, who watched in anguish as his beloved Notre Dame Fighting Irish fell to the Ohio State Buckeyes that same weekend. 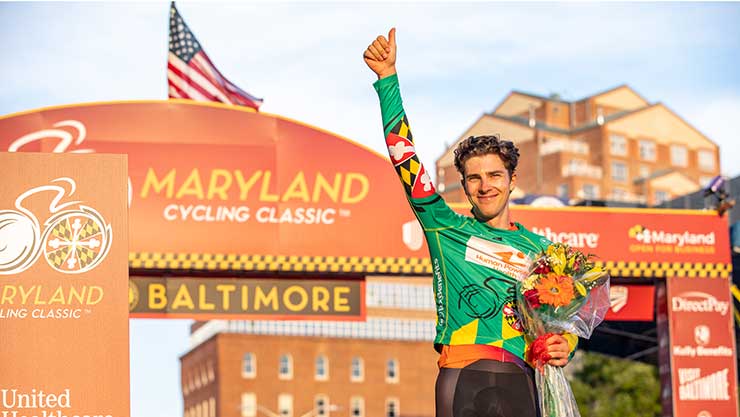 There is no shortage of cyclists, particularly since the pandemic saw a surge in bike sales and repairs. Likewise, bicycle events are popular across the country for riders at various levels. International champion riders comprised the participants, who came from as far away as South Africa and Israel. Medalist Sports competition director Kevin Livingston, a former professional rider himself, worked his connections to build such a strong group for the first-time race. “There is not a race of this caliber in the U.S.,” says Aronhalt.

Cyclists of Tour de France quality have their pick of events in which to compete. Aronhalt says the competition area plays a large factor in final decisions. Maryland Cycling Classic presented a nice mix of Baltimore County’s rolling hills and downtown Baltimore’s urban roads. “We wanted their Maryland experience to be just as spectacular as all the other big, big races they do around the world,” says Aronhalt.

By its very nature, the Maryland Cycling Classic is a different economic driver than stadium sports. That said, cycling offers some unique benefits not lost upon professionals seeking to drive tourism dollars. The “sport has a lot more international viewership than it does probably domestically,” notes Hasseltine. As a result, a global audience was introduced to parts of Maryland they’d never seen, demonstrating the value of an extended stay. Of course, hosting one of the country’s premier cycling events will surely draw more American visitors and put Baltimore in a good position for wellness-minded travelers. So, while hotel rooms were certainly filled by this year’s race, the positive benefit could be long term. 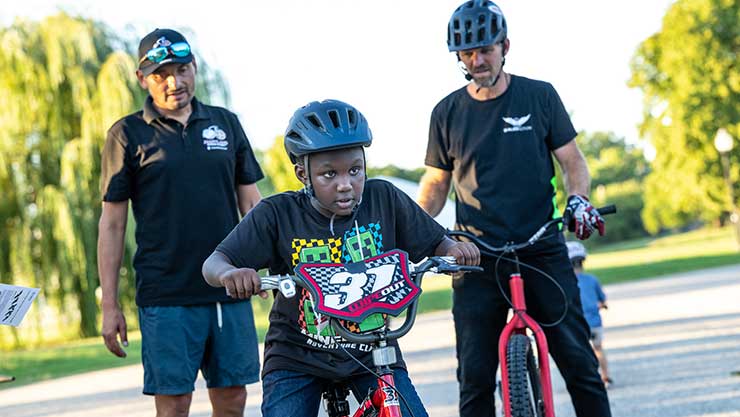 Beyond showcasing different scenery, the event schedule promoted heavy involvement within the Baltimore community. The highlight was a Bike Jam at Patterson Park. Street festivals, a health and wellness expo, a charity ride and a racers meeting with local students enhanced the experience beyond a simple race.

Hitching your ride to cycling has other benefits when selling a destination too. “The great thing about the sport of cycling is we do have flexibility to change up the route,” says Aronhalt. Future possibilities include starting the race in downtown Baltimore and making its way to Annapolis, Maryland’s scenic seaside capital, or potentially head all the way to Frederick. “We can mold this the way we want to,” says Hasseltine. 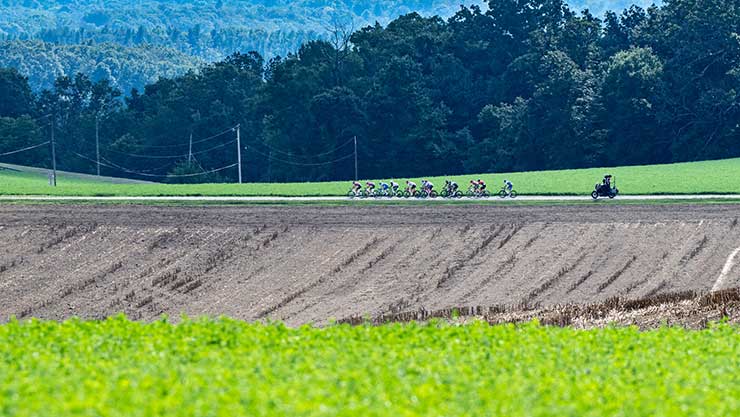 Medalist Sports always maps out events with economic sustainability and growth in mind. One obvious addition all sides would like to include next year is a women’s race. The challenge is once again working around existing schedules, but the event team has already demonstrated its ability to do just that. “This is just the first step,” says Hasseltine.