Valencia, Spain, was the big winner when the Federation of Gay Games selected its 2026 host city. The decision, more than two years in the making, is a strategic one completing an unusual selection process during a pandemic. Ultimately, it should not be shocking that the end result culminated with two major firsts for the Gay Games:

Just to continue the unusual nature of the latest site selection process, the typically quadrennial event will be held just three years after the upcoming Gay Games in Hong Kong, delayed a year to 2023 due to COVID-19.

The journey from RFPs to November’s announcement in Brighton, England, involved new challenges, including trying to dodge the pandemic when traveling. (For what it’s worth, David Killian, site selection officer of the Gay Games, managed to avoid COVID when touring three finalists—Munich; Guadalajara, Mexico; and Valencia—only to catch a mild case while bowling in his home city of Philadelphia.)

That said, there are many lessons to be learned from future bidders and the Gay Games itself following the most recent cycle. In overcoming obstacles, the federation maintained its core principles and focus. Killian took Connect Sports behind the scenes of the internationally intriguing road to Valencia and what it means for the Gay Games going forward. Here, we share six key takeaways. 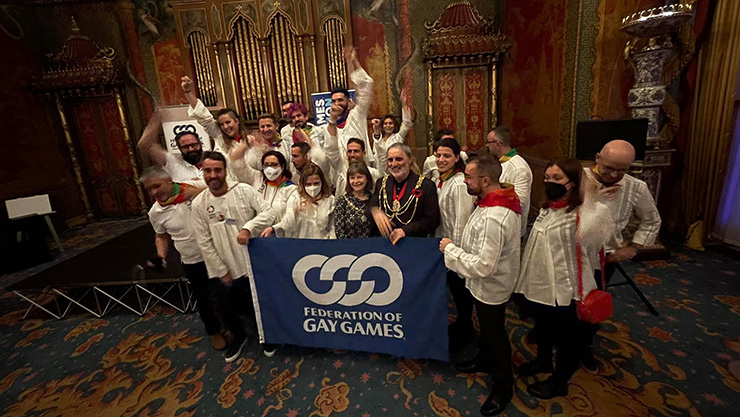 It Starts With the Basics

The Gay Games are truly a celebration of the LGBTQ community. There are plenty of cultural moments that leave marks on the host community (just ask Cleveland). But sports will always play a major role during the week’s festivities. And what makes the difference for all rights holders and sports organizers? “It’s all about the venues,” acknowledges Killian. Of particular note are Valencia’s remarkable golf course off the coast and its basketball gym, home to the Spanish national team. “It’s the best basketball venue I’ve ever seen,” notes Killian.

Now it can be said Valencia’s bid committee was fearful its venues were in too close of proximity to one another. It turns out the opposite is true. Most of the events will be held along a greenway downtown that takes five minutes to traverse via bicycle, Killian describes. “They have a lot of venues really, really close together and the venues were of good quality, so those are two big strengths that they had,” he says.

If relationships were everything, Munich would be a shoo-in based on the three finalists. The German grass-roots movement is as strong and long-lasting as any in the federation. Prior to the bid cycle, Killian had never visited Valencia and didn’t know the people behind the bid personally. The 100-page bid—down from the previous 300-page requirement—spoke volumes about the Valencia CVB’s research and understanding of the games. That carried over throughout the process down to the final presentations in Brighton. Killian acknowledges some bids have been won during that last pitch, and he feels Valencia’s consistency translated to a less dramatic finish. “You’re not voting for where you’re going to want to go on vacation,” says Killian. “You pick what’s best for the federation—the city which has the best infrastructure, facilities and team to effectively put on the games.”

Timing Can Be Everything

COVID was more of a nuisance than a deciding factor. For instance, the international spike in cases came just after the federation’s gathering in England. A much larger issue turned out to be the 2026 World Cup. Once FIFA awarded the monthlong tournament to North America, some U.S. cities that initially expressed interest in bidding on the Gay Games did not complete the RFP because they did not know the status of hotel rooms, venues and more during the same summer. FIFA has yet to name the cities that will host games.

While Valencia’s winning bid is unique in that it came via the CVB and not through a grass-roots organization, the boots on the ground did their part. Killian applauded Valencia’s decision to have the city’s deputy mayor and an LGBTQ+ entertainer participate in the final presentation. Another key point is that Valencia’s representatives assured the federation that the Gay Games would be the main event in town and they would promote the event visibly throughout the city. The committee rightly wants the community to celebrate the event and treat it as the big deal it is.

The Gay Games Are Global

In the past, the Gay Games alternated (not necessarily purposefully) between a U.S. city and an international destination to host the event. Hong Kong’s victory for the 2022/23 games broke the trend. Valencia opened new opportunities to reach participants in the Mediterranean (names in Italy and Greece) as well as build a bridge to North Africa. Meanwhile, the federation is counting on Americans to continue to show a willingness to travel, especially to new destinations.

That said, will the Gay Games zero in on the U.S. for 2030, when the World Cup won’t be a factor? “I stress this over and over—it’s what is best for the federation.”