Ion International Training Center in Leesburg, Va., was built and named based on one guiding principle: Figure skaters don’t play around.

Yes, figure skating is comprised of young men and women who have fun like ordinary individuals. But when they step on the ice, they skate and don’t play. However, the opposite is true when discussing another popular winter sport: ice hockey. You see, hockey players definitely don’t skate—they play.

In building one of the country’s largest and finest facilities of its kind, the husband-and-wife team of Luiz Taifas and Mitra Setayesh conscientiously avoided a faux pas accommodating both groups of athletes. The result is that in two short years—most of which has been under the cloud of a pandemic—Ion has emerged as a positive force for sports tourism in Northern Virginia, and, specifically, Loudoun County.

“We’ve put together everything that is needed on a high caliber to host competitions,” says Setayesh, Ion’s chief operating officer.

A hotbed for elite youth ice hockey since its inception and training home for international ice skaters, Ion moved into the national spotlight hosting the 2022 U.S. Figure Skating Championship Series, presented by Toyota.
More than 330 skaters, the most of eight venues U.S. Figure Skating employed this fall, took to the ice for the center’s first national competition. Rave reviews from athletes, trainers and event organizers were vindication of Taifas and Setayesh’s vision.

Taifas has firsthand knowledge of how an elite ice facility should operate. Years ago, he was on the other side of the action as a young skater destined for greatness. He became Romania’s national champion and was a member of his home country’s Olympic team for 14 years.

An ice hockey and figure skating coach for 22 years, Taifas saw a vacuum in his adopted home. For all of Leesburg’s many attributes—proximity to Dulles International Airport, many hotels, and excellent restaurants and shopping—there was not a sports facility worthy of being so near the nation’s capital.

The timing could not have been better to initiate the project, which culminated in the 100,000-sq.-ft. facility’s 2019 opening. The Alex Ovechkin era has not only produced a Stanley Cup for his Washington Capitals, but is also responsible for an undeniable spike in interest in ice sports in the D.C. area.

Indeed, Setayesh says the participation growth in the capital far outpaces the rest of the United States. Meanwhile, the Washington Figure Skating Club has an impressive 2,000 members. 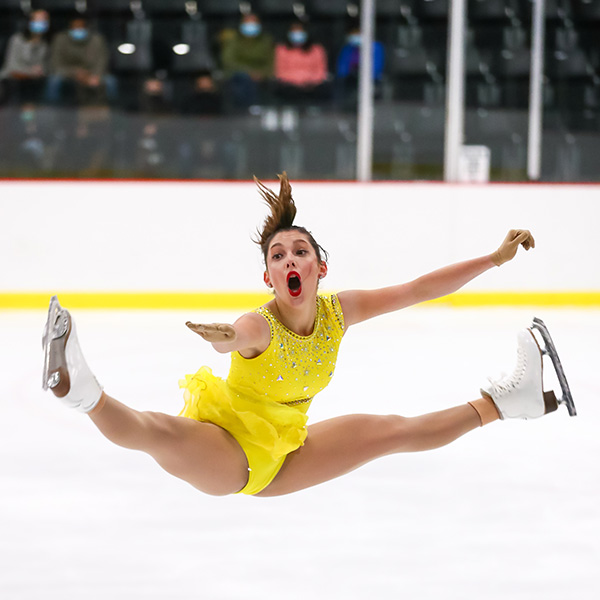 While there are other rinks scattered across suburban Maryland, Washington, D.C., and, particularly, Northern Virginia, only Ion is capable of hosting large-scale events.

Its flexibility sets it apart, not just locally but throughout the country. For instance, a new three-rink training facility in Norwood, Ma., outside of Boston, is also highly regarded. But it is only built for figure skating.
Ion regularly hosts hockey and skating competitions.

It is also the only venue for curling in the immediate area. Flooring can be placed atop the ice for most indoor sports, including gymnastics due to the center’s 40-foot-high ceiling, as well as trade shows.

While other venues were forced to cut back staff, Ion doubled staff during the pandemic to maintain the highest safety protocols. A filtration system ensures fresh air is continually circulating, providing another layer of safety.
Vaccinations, now available for children 5 years old and up, should continue to boost participation.

The upcoming Winter Games in Beijing will also add numbers to ice sports, at least in the short term. As Ion’s reputation grows and participation increases, Setayesh predicts Ion expects to run out of ice time. The plan is to raise capital to double the center to four sheets of ice (three NHL-sized) to keep up with demand and fulfill Ion’s purpose.

Care for the athletes overrides the drive to produce the next great NHL star or American medalist. The center is unusual in that it pays its coaches and trainers (most facilities rely on volunteers), many of whom share Taifas’ background in international competition.

Taifas gives the same speech to any newcomer, his wife says: “The second you walk through that threshold, it's no longer about you or your name, it's about the kids.”

Taifas’ father, John, was a driving force in his son’s growth as a figure skater. While he passed away before Taifas competed at the Winter Games, his presence remains. Many readers may know an ion is a positive force. “Ion” is also how the name John is spelled in Romanian.

Now, a new generation of athletes is learning the passion and skills from this line of winter sports stars. The co-founders could not be prouder, knowing what they have built will last.