Team IP, a sports merchandising company formed out of “necessity and adversity” in 1992, is now securing major partnerships in the aquatics world and making waves in the sports tourism industry.

President and CEO Randy Sparks originally launched the company to get by in between jobs. “I’d lost my job and had a young family, so we had to go find something,” says Sparks. He started to see success selling sports-themed sunshades for car windshields in Stuart, Florida. “From there we went and bought a t-shirt press, and discovered Grad Night in Florida, where all the kids go to Disney. We sold $12 shirts for 10 years, and now we’ll do more than 1,700 events this year from college football on down.”

The company earned its name “Team IP” from a previous business owned by Sparks’ father-in-law–“International Printing.” Sparks added the word “Team” to help potential clients understand that it was sports-specific, and the name stuck.

In 2004, Team IP’s operations were disrupted entirely when two hurricanes blew through South Florida: Frances and Jeanne. After years of rebuilding, outsourcing open projects and finally purchasing a new building and equipment, Sparks met with a consultant who helped him realize that Team IP could be even more successful if it kept outsourcing the printing and stayed in charge of design, distribution and events.

“In 2008, we got out of production,” Sparks says. “We took all the new equipment we had and sold it to a company here in Stuart, an employee who had worked for me. We went to the bank, transferred the leases, and helped set him up. From there, we started printing nationally and internationally, and never looked back.”

“He said, ‘I love what you do but I’m at field hockey, so that’s never going to happen,’” Sparks recalls. “Lo and behold a few weeks later, he gets named CEO with USA Synchro, so we followed up.” 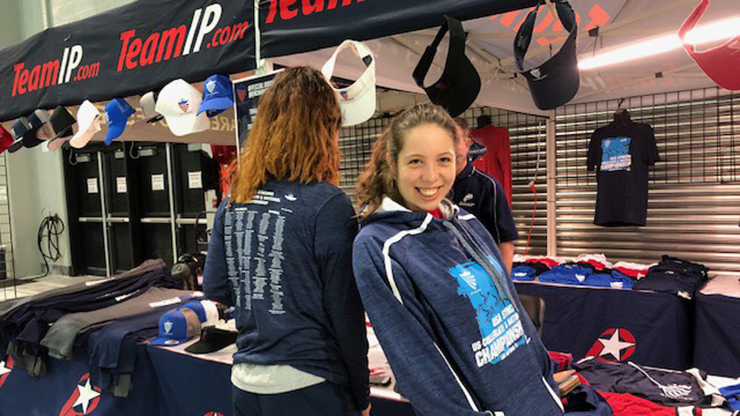 That new relationship helped Team IP secure the partnership with USA Synchro (synchronized swimming). Another program the company will be working with is USA Diving. As the exclusive merchandiser for USA Diving, Team IP will provide the team with products for the 2020 Olympic Trials in Indianapolis, which will give the company exposure on NBC and in front of an estimated 55,000 attendees.

At its current scale, Sparks estimates Team IP faces only three to five competitors in terms of turnkey operations for championship events.

“We’re in a blue ocean, not a red ocean,” he says. Sparks and his team of 32 employees, who work from satellite offices across the country, use unique design features and high-level customer service to keep their edge in the industry.

In 2011, Team IP launched its own private label and a vertical in China. It has started working with “gel print,” a unique decoration that professional sports organizations such as the NBA and NCAA use. The private label allows Team IP to offer the same specialty design feature enjoyed by professional athletes to high school teams.

Above all, Sparks is still focused on providing merchandise that will catch the eyes of fans at every age.

“We have five or six generations attending our events,” Sparks says. “We build a line of products to make sure there’s something for everyone.”