It takes a village to host a Ryder Cup.

Jason Mengel, 2021 Ryder Cup director, says more than 1.3 million square feet of infrastructure was built on the grounds of Whistling Straits outside of Milwaukee. It took months to put it all together, and the deconstruction is still in progress a month after the marquee events.

“It is quite an undertaking,” Mengel says.

His comment applies equally well to the huge build-out on the prestigious course or simply to the Ryder Cup in general.

While far fewer players participate in the U.S. vs. Europe competition than in a regular PGA tournament, the scope of the Ryder Cup is grander. In many ways, the competition is like the Super Bowl of golf, complete with ancillary activities leading up to the Sept. 24 to 26 match play.

Back to our village comparison. Visit Milwaukee, and its sports-specific division, Sports Milwaukee, was the primary DMO for the event and received the lion’s share of the economic impact. With 40,000 to 45,000 spectators filing in each day, the Milwaukee region expected to generate about $70 million in hospitality-related revenue, coming from filled hotel rooms, restaurants and shopping outlets.

The reach extended much farther. In-state sports hubs Green Bay, Fox Cities and Madison saw a ripple effect, believed to bring the economic impact up to $130 million for eastern Wisconsin. Sheboygan County, where Whistling Straits is located, hosted most event staff like Mengel and the international media.Some attendees stayed as far away as Chicago, about a two-hour drive, to catch the action each day.

“It was a regional effort for sure, which makes it unique,” says Mengel.
While it is true each Ryder Cup, which alternates between a European and U.S. home for each edition held two years, has a distinct feel, this iteration will stand out. Above all else, it will be known as the Ryder Cup that survived the COVID-19 pandemic.

Delayed a year, the event went on with some limitations but primarily without a hitch. Crowds reached full attendance, albeit with fewer international travelers than usual, and masks were required indoors. Most of all, the Ryder Cup maintained its customary prestigious feel.
“Postponing the event proved to be the right decision,” notes Mengel, who was on-site from 2017 onward to pull off the event. 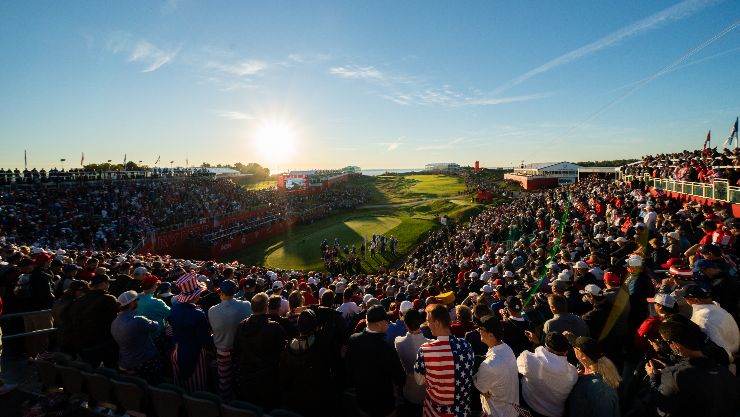 We look at four ways the 2021 Ryder Cup remained one for the books.

The Super Bowl of any sport is not going to use a subpar facility. Whistling Straits is one of the best, having hosted major championships previously. Mengel compares it to none other than Augusta National when it comes to one key amenity: enough on-site parking for all attendees.

At a typical golf tournament, the height of the action is on the final few holes. But the Ryder Cup format is unpredictable where each match finishes. To compensate, Mengel’s team created a stadiumlike structure by the first tee to jazz up the crowd. Think of the experience as a more sophisticated version of when basketball team introductions are accompanied by a music and lights show before each game.

“We’re certainly disappointed we weren’t able to welcome the usual numbers of European spectators,” Mengel acknowledges, noting the travel restrictions. But the fans there made up the difference. The Ryder Cup has a rowdier feel than quiet tournaments, a key factor in the head-to-head matchups. “The back and forth is the essence of the Ryder Cup. There was still a very vocal group of European supporters.”

The U.S. is filled with so many great courses, choosing one for a once-every-two-years event is challenging. With the legendary Bethpage Black in New York on the books for 2025 and the West Coast to follow, picking a prime spot in the Midwest made sense. And while Milwaukee may not be the country’s largest market, its base of sports fans and proximity to other fanatics created an environment in which multiple DMOs worked together for the betterment of all.