Nothing quite symbolizes Indianapolis, and Indiana for that matter, quite like basketball. So, it’s fitting a basketball tournament in July revived Visit Indy’s group business.

Nearly 300 women’s teams, mostly from the Midwest, traveled to the Hoosier state for the Tournament of Champions. The event was different than previous ones—including a new location, fewer teams and fans and Nike dropped its sponsorship due to the health crisis. But the aptly named Leonard Hoops, Visit Indy’s CEO and president, says Indiana Convention Center and Indianapolis’ hospitality industry greatly benefited from the city’s first large gathering since March.

“Indianapolis is the most group dependent city in America,” says Hoops. “We are the amateur sports capital of the world. There is no question how important it is to get this business back.”

Basketball has been particularly in the novel coronavirus’ crosshairs since the crisis began to take hold in the United States. Still reeling from the death of Kobe Bryant, the NBA became the first professional league to postpone its regular season when Utah Jazz center Rudy Gobert tested positive for COVID-19 on March 9. Soon thereafter, the NCAA canceled March Madness.

Because it is primarily an indoor sport and involves plenty of contact, basketball presents a large amount of challenges to execute during this pandemic. Other than staging a H-O-R-S-E competition, event organizers can’t do much to protect participants in games.

To compensate, the focus has been on what can be controlled. Socially distancing spectators, reducing audience capacity, checking attendees for fevers and other symptoms, separating teams off the court as much as possible, limiting the number of venues and requiring masks have become the norm.

The most obvious example of this is the NBA’s bubble-like environment that it is counting on to allow its season to conclude successfully at Disney’s Wide World of Sports in Kissimmee, Florida.

On a smaller scale, other tournaments and events throughout the country have appeared to run as well as could be hoped.

Read on for how basketball is playing a role in a much-needed rebound for host destinations and the sports tourism industry.

A summertime tradition since its inception in 2014, The Basketball Tournament is a $1 million winner-take-all tournament held usually at various sites and aired on ESPN. Co-founders Jonathan Mugar and Jennifer Todd, who is also the company’s executive vice president of strategic partnerships, knew TBT could not go on as usual this year.

Rather than throw up an airball, the event planners scaled down and regrouped. Columbus, Ohio, which has hosted TBT’s preliminary rounds in past years, was awarded the revamped, single-city 2020 event, which featured 24 teams (there were 64 in 2019) and was played from July 4-14.

Players and staff were forced to quarantine before traveling and as soon as they arrived in Columbus. Teams were separated except when they played one another and masks were mandated aside from games. Hyatt Regency Columbus, a five-minute walk from Nationwide Arena, was booked out to ensure only TBT participants stayed there. Only 50 people were allowed in the arena per game. 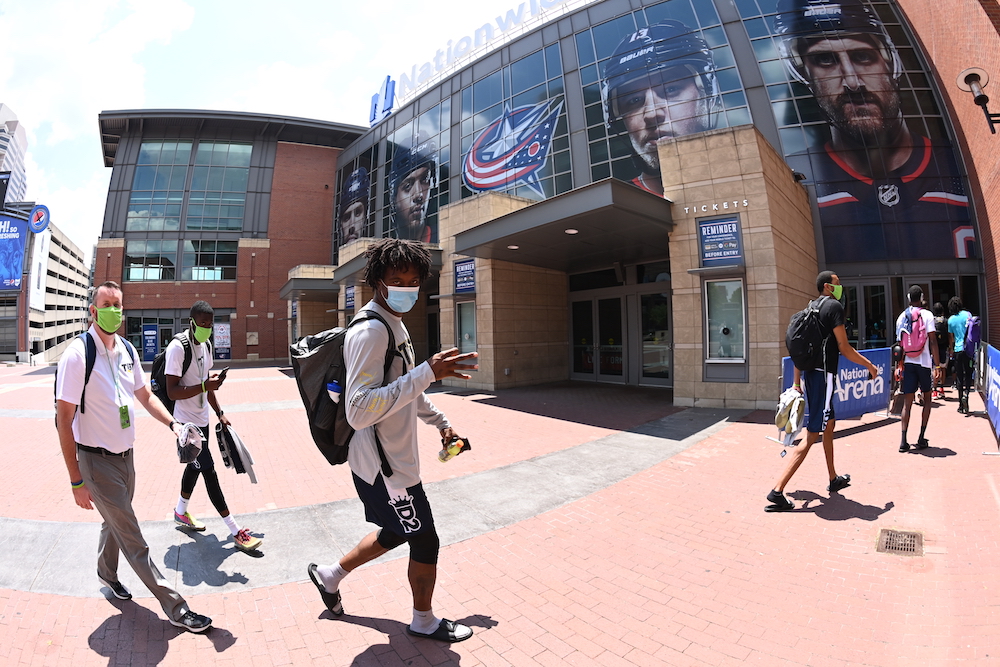 Once a player tested positive, the whole team was disqualified. Four teams did not make it to Day 1 and another was lost midway through the tournament, but ultimately TBT was completed with a champion: The Golden Eagles, comprised of Marquette University alumni.

“The biggest lesson is surely that it can be done,” says Todd of playing amid a pandemic. “We learned so much about science, the transmission of the virus and safe practices. Our plan really proved itself out.”

Linda Logan, executive director of the Greater Columbus Sports Commission, says the city did not get the official green light from health officials to allow the tournament until June 8, less than two weeks before staff began arriving. By the time the games began tipping off, COVID-19 cases were surging again all over the country. “They were so patient with us,” Logan says of TBT. “They had to wait until the twelfth hour for approval.

As part of the unusual circumstances to make the event happen, Logan had to forgo attending in-person. But she was among the worldwide audience watching on television. That exposure, Logan predicts, will prove larger than the estimated $721,342 in economic impact Experience Columbus estimates.

“It was important for us to have to some good news to share in the community,” says Logan. “It was important to put our best foot forward with the message that Columbus is open for business and is safe.

The old saying in the industry is events beget more events. This normally means if a destination proves itself a welcoming host, it will likely win returning business from clients and earn a reputation to draw new organizers.

In the case of the Tournament of Champions, the expressions took on a new meaning for Visit Indy. Indianapolis is in what Hoops describes at stage 4.5 of a five-point re-opening plan. Stage 4 allows for gatherings of 250, which upon clarification, meant Indiana Convention Center was well-suited to host a tournament bringing in 9,000 visitors.

Hoops says health officials explained the convention center was not limited to 250 people, but rather an exhibition hall or conference room would be. The venue’s ballrooms average about 55,000 square feet, allowing for more than adequate social distancing to allow for 22 courts to be laid over 11 halls. Masks were mandated and there was only some small resistance to wearing coverings, Hoops reports. 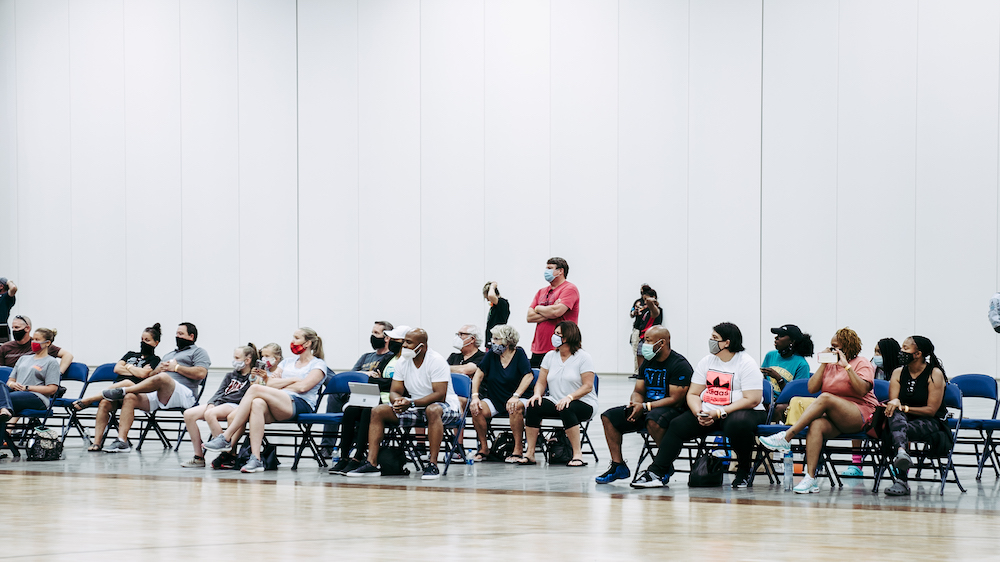 The plan was attractive enough to draw Tournament of Champions, which is normally Chicago-based but was forced to move due to Illinois’ restrictions. Furthermore, two other tournament organizers heard about the event and essentially subleased the courts from Tournament of Champions. What was one tournament, with an estimated $8.1 million economic impact, became a three-in-one deal worth far more. As a sign of the event’s importance, JW Marriott Indianapolis reopened to assist the citywide, which saw participating hotels have 70% occupancy rates.

“The Indiana Convention Center and the City of Indianapolis pulled out all the stops and worked hard to ensure this event went off without a hitch,” says Tournament of Champions’ Director of Event Operations Amanda Ewing. “While our main focus was to provide a safe place to play for those who were ready to do so, we also saw this as an opportunity to help kick-start our industry in general and show how to keep people safe while still conducting business.”

While Indianapolis is used to hosting larger events, Hoops says the good news is needed. He hopes sporadic sports events—volleyball, esports, etc.—will help fill empty calendar dates this fall. But his eyes, as with the rest of the city, are on 2021, when Indianapolis is scheduled to host the NBA All-Star-Game and the Men’s Final Four.

Hoops thinks reports of vaccine breakthroughs give Indianapolis a better than decent chance at hosting both, even if numbers are down compared to past years. “You can make the argument no city needs group business more than Indianapolis,” he says. “The vaccine can’t come fast enough.”

While COVID-19 forced Tournament of Champions to a new site, the virus led Stephens to stay close to home with facilities with whom he already has solid working relationships. PrimeTime Sports sold out seven tournaments this summer in Houston and Dallas. This past weekend’s PrimeTime Sports National Basketball Championship was scheduled to have 250 teams from as far away as Chicago and Arizona.

To make it, and the six other events, happen, Stephens says he has “decision fatigue.” Examples of major decisions include restricting teams to playing at one site and have them play back-to-back games so each only enter and exit the building once.

“I’m not a denier” of the coronavirus, Stephens says. “We don’t take the decision to host events lightly. I promise no one that my events are risk-free, but I promise we have strong best practices as there are in the basketball space.”

Beyond mandating masks, PrimeTime Sports has taken some extraordinary safety measures. These include purchasing electronic whistles to eliminate the cough-like motion referees use dozens of times per games to call fouls and signal stoppages of play. He also prefers doing away with bleachers and asking spectators to bring their own chairs, which makes it easier to maintain social distance. All but two of PrimeTime’s preferred venues agreed to forgo bleachers.

The organization also fast-tracked its planned change to cashless gates, meaning attendees would need to buy passes online just as if going to a movie or concert. 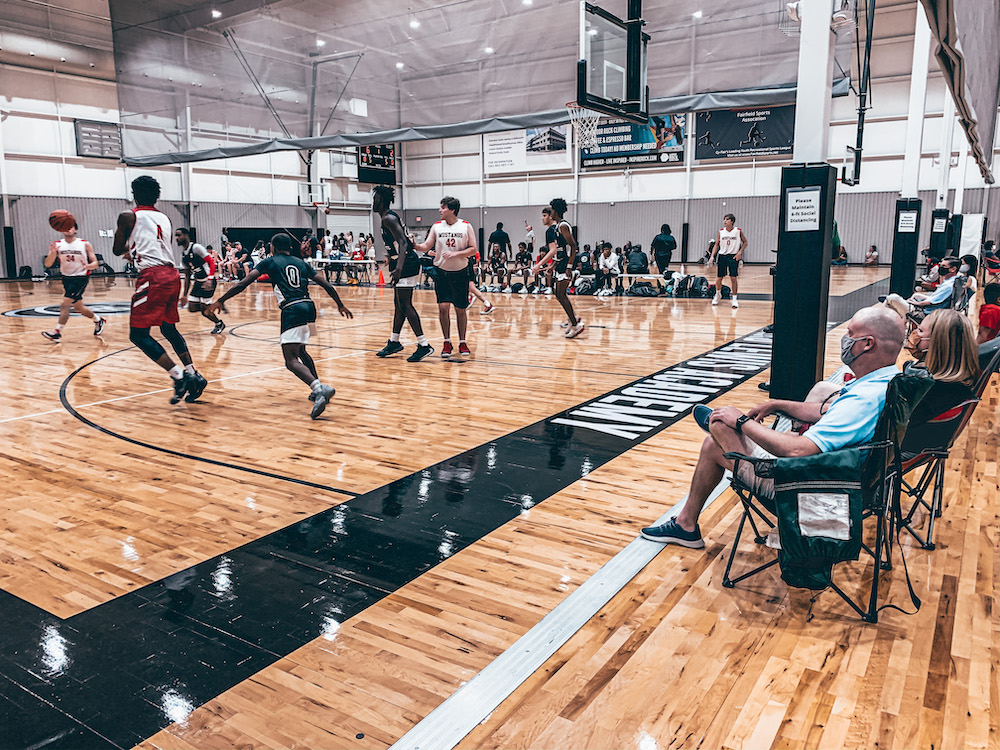 Other changes have been somewhat of Stephens’ control. His events typically featured third through 12th graders, with the bell curve landing squarely on eighth-graders. But there are fewer younger kids than usual playing this year and a larger contingent of older teenage athletes. In part, he says, that’s because teams are traveling less for health concerns and because many states are not yet allowing indoor events.

Stephens also limited the tournament fields, turning away teams for each event to ensure he was comfortable PrimeTime maintained a safe environment. Even the 250-team championship across the Dallas Metroplex had more than 700 teams last year that played at 14 different sites. He says smaller and safer is far better than nothing.

“It was important we continue to maintain our brand experience,” Stephens says of going forward. “But more importantly, in the sports business, you have a high level of respect for the value of the sports culture and the experience it provides for young people, in particular, with their development.”

Just like PrimeTime, AAU has also noticed its events skew toward older amateur athletes. With high school seasons in jeopardy, the exposure an athlete may receive playing in Florida—with games livestreamed by BallerTV—could be the deciding factor in receiving a college scholarship.

The number of teams (between 52 and 71) was smaller than normal in part due to logistics. The NBA is using AAU’s typical Disney home, where the organization has 24 courts at its disposal. Instead, the events were at Game Points Event Center, which allows for up to 10 events.

AAU reports nightly cleanings of the facilities, temperature checks, limited spectators and separate entrances and exits among its safety measures. Others include cashless entrances, no concessions beyond bottled water and anyone who entered the facility signing a waiver.

“It’s important to provide an opportunity for athletes to participate if it can be done safely and that’s what we are trying to do,” the AAU says in a statement.