Well, virtually anyway. During Oakland A’s home games, a recording of the A League of Their Own star can be heard hawking the ballgame grub. But that’s not the only unusual part of this year’s Major League Baseball season. 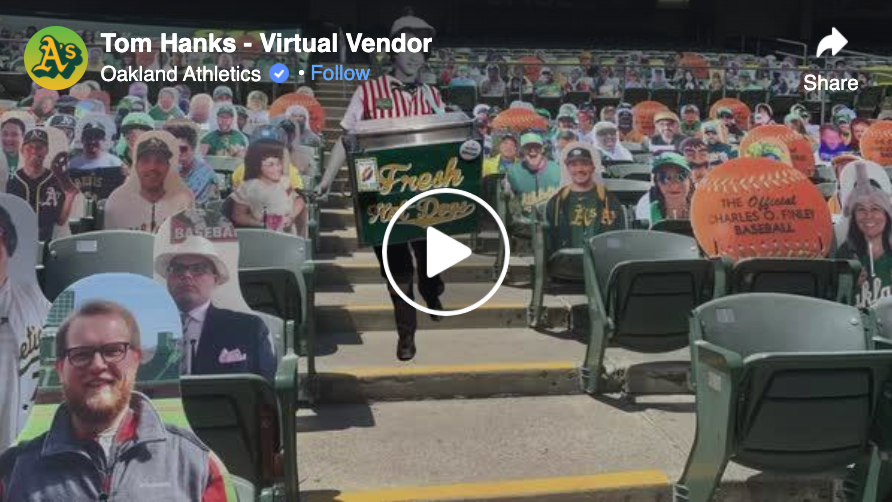 The league resumed play last Thursday, marking the start of a truncated season with 60 games as opposed to the usual 162. That night, at the Yankees-Nationals matchup in Washington, D.C., superfan Dr. Anthony Fauci threw out the first pitch. But he wasn’t the only COVID-related moment. To help prevent the spread of the virus, lots of the traditional baseball rules and practices (like spitting) are now deemed big no-no’s, including fans in the stands.

As a necessary safety precaution, the MLB, like other sports organizations, is prohibiting folks from attending games in person. So in order to fill those empty stadiums, the league is getting creative. For example, Fox Sports inserted "virtual fans"—that looked like Sims characters dressed in team colors—into live shots during Saturday's games.

And some teams are going the low-tech route by offering fans the chance to purchase a cardboard cut-out in their likeness (or their dog’s) to sit in the seats. For a $500 donation to the Red Sox Foundation, Boston Red Sox fans can sit atop the Green Monster at Fenway Park. At the Phillies’ opening weekend at Citizens Bank Park in Philadelphia, the team honored local healthcare workers by creating cutouts of doctors, nurses, and other frontline medical personnel, which were displayed behind home plate. 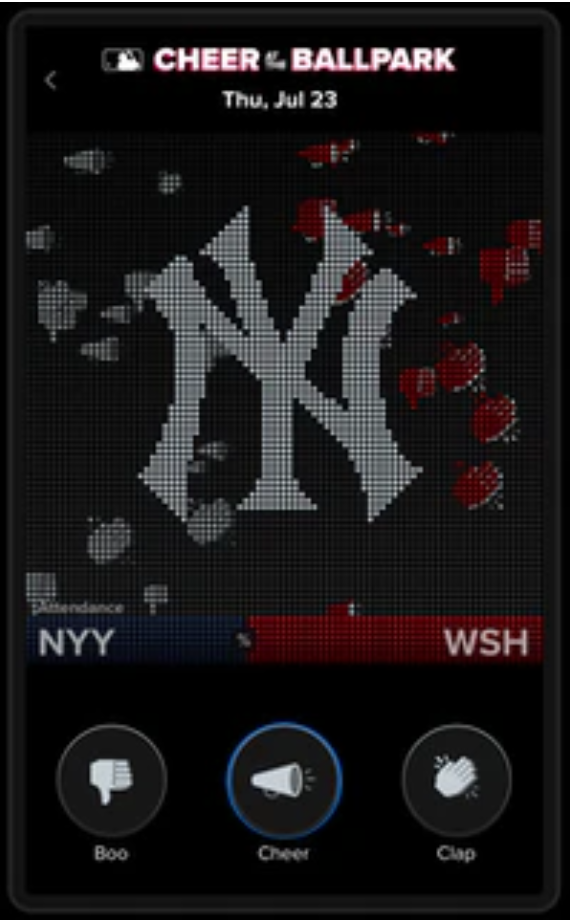 The MLB recently introduced a new “Cheer at the Ballpark” feature that allows fans to virtually cheer, boo, and clap. Photo: Courtesy of MLB

When the NBA resumes its season on July 30 at Walt Disney World in Orlando, it’s rumored that the league will debut a virtual grandstand idea that resembles a concept used at a soccer game in Denmark, where fans tuned in via a massive Zoom call that was displayed on large screens along the pitch. The NBA might also use 2K Sports’ video game sound library to replicate crowd noise.

Similarly, the MLB also recently introduced a new “Cheer at the Ballpark” feature that allows fans to virtually cheer, boo, and clap via the MLB website; audio engineers are able to program the on-site crowd noise in the stadiums to reflect the fans' reactions, mimicking an actual in-park experience. Yamaha Corporation also developed a comparable app called the Remote Cheerer, which is used during Japan’s Nippon Professional Baseball league games.

And earlier this month in Japan, when the Fukuoka SoftBank Hawks baseball team faced off against the Rakuten Eagles, Boston Dynamics (which is owned by SoftBank) provided some stiff cheerleaders in the form of its robot dog named Spot and its humanoid robot Pepper. 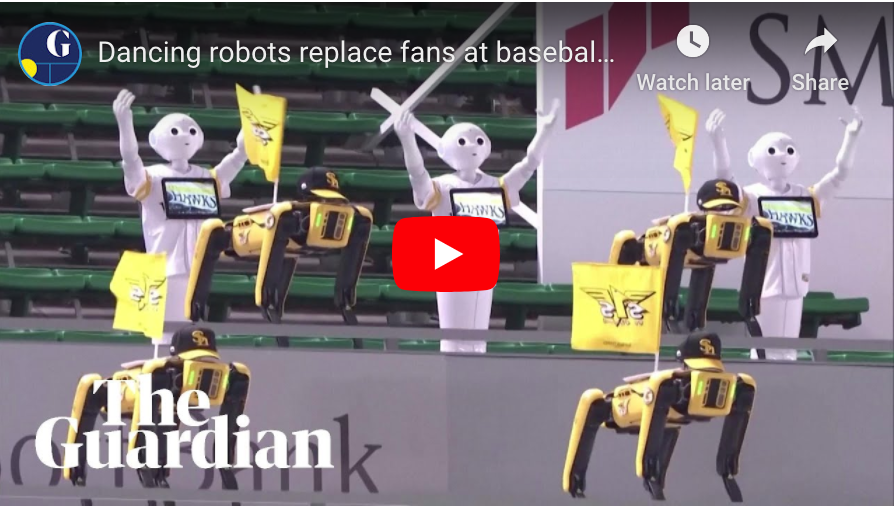 Michael Perry, vice president of business development at Boston Dynamics, explained that Spot can be programmed to do a number of tasks, including cheering. But the high-tech pup isn’t built to react to live action, so don't expect any spontaneous tail wagging.

In addition to artificial crowd noise and robotic cheerleaders inside the stadiums, teams are also hosting live events tied to games and matches in order to keep fans engaged and excited, despite being on the outside. 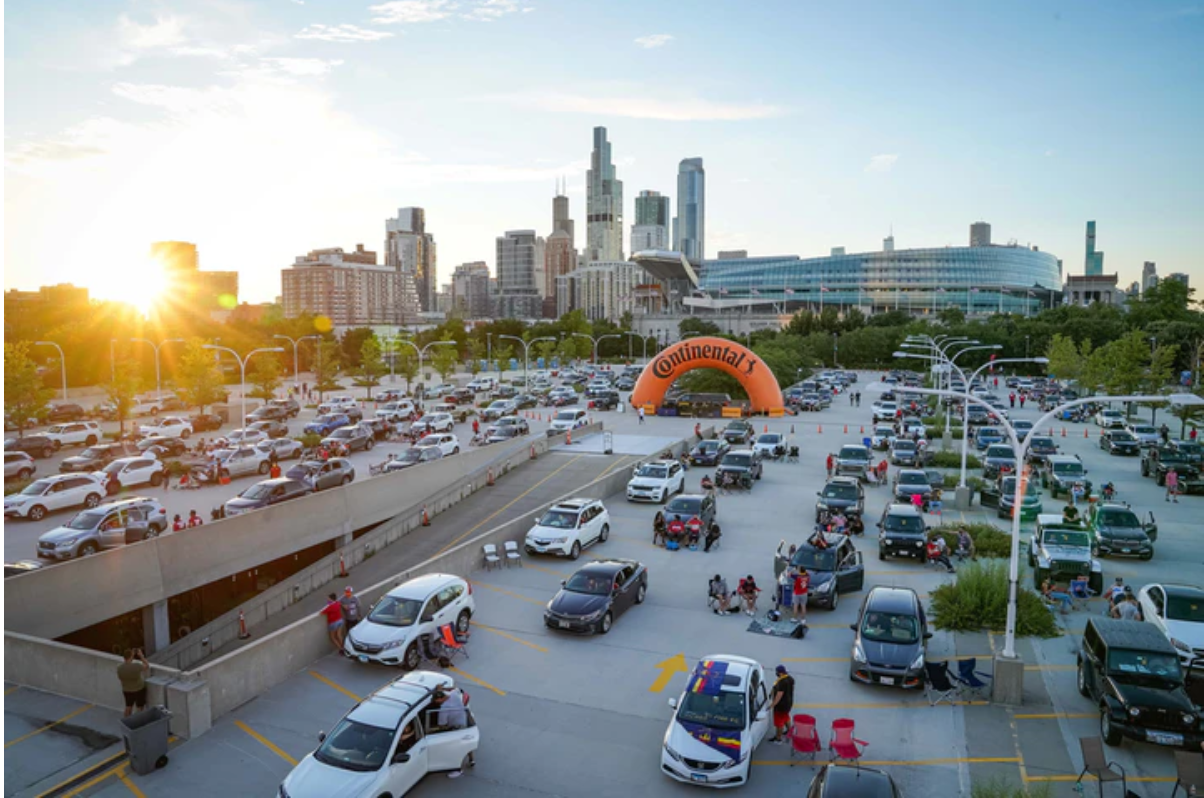 During the MLS is Back Tournament, Chicago Fire FC and Continental Tire hosted their “Drive-In Matchday” watch party on July 19, where 300 cars filled with fans were able to watch the team play against the San Jose Earthquakes (the match took place in Orlando) on two huge LED screens on the Waldron Deck at Soldier Field in Chicago.

Brian Quarles, executive creative director of rEvolution, the integrated sports marketing agency tasked with producing the tailgate-style event, said that Continental Tire has been a sponsor of Major League Soccer for over a decade and that part of the agency’s contingency planning for the season was to brainstorm how to replace the company’s traditional game-day activation.

“Safety of attendees is always the number-one priority for any event, especially in a COVID-19 environment,” Quarles said. “We worked closely together with the Chicago Fire and Soldier Field to develop health and safety protocols that were consistent with the city of Chicago and ensured a safe and smooth event experience for everyone involved.” This included requiring masks, socially distancing cars, and prohibiting alcohol. He also explained that registration was required for the event in order to accommodate spacing, with parking spots assigned based on vehicle size.

Although the event was free, fans were encouraged to make a donation to the Chicago Fire Foundation, the charitable arm of the soccer team. Kristen Fulmer, CEO and founder of Recipric, a sustainable sports change agency, agrees with this strategy, suggesting that organizers consider donating a portion (or all) of admissions to a local charity that’s related to COVID relief, racial justice, or another mission-driven cause. Adding that this “can better ingrain the team in the local community.” She also suggests encouraging charitable action by offering incentives such as a free ticket with a blood donation or admission with a food donation.

In an effort to minimize contact and contain the spread of the virus, sports leagues like the NBA are consolidating their play to a handful of venues and cities. Fulmer recommends repurposing these vacant spaces for community use such as for a food drive kitchen, COVID testing, or even storage for PPE or ventilators.

For example, at the start of the pandemic, the Staples Center in Los Angeles donated 7,000 pounds of food to local homeless shelters, and Pittsburgh’s PPG Paints Arena, along with the Pittsburgh Penguins and Aramark, donated perishables to 412 Food Rescue. It’s a way for teams to stay involved within the community—with or without local games.

“In this time of COVID-19, we believe that it’s a misnomer to say that games are happening without fans,” Quarles said. “While fans may not be present, the fans are still there and they are looking for opportunities to engage with the team and other fans in a safe manner. The key to any successful activation, with or without fans present, is adding (not distracting) from their experience. The best teams (and sponsors of those teams) successfully do just that.”